Yes, this happens from time to time that Android device makers hire few influencers to promote their latest device and these influencers post their endorsements from the device they actually use, which is sadly in most cases Apple’s iPhone. But when this happens to Google, it’s not fun anymore.

Google is still promoting the Pixel 2 XL, even thought Pixel 3 and Pixel 3 XL will be release with in few weeks from now. Last promo was done via Bollywood star Anushka Sharma, who posted following images on her twitter and made sure that those photos were taken via Pixel. Just look at all the google and pixel hashtags she mentioned with in the post.

But luckily Marquess Brownlee screenshotted the fact that this tweet was posted from an iPhone.

Ok I don’t even want to know how this keeps happening but it’s hilarious pic.twitter.com/sUuHVh4exw

Her team quickly tried to explain that these photos were taken by them with Pixel phone and later that they shared it on iPhone because they did not want to log in from different device.

Ok I don’t even want to know how this keeps happening but it’s hilarious pic.twitter.com/sUuHVh4exw

Later that day the actress deleted those tweets and retweeted them.

And if you look closer, you will find out, that she have retweeted it from Twitter Web Client, which most probably means, that she just have posted still with her iPhone but in a web browser. Maybe installing apps on Google’s Pixel 2 is not actress friendly. 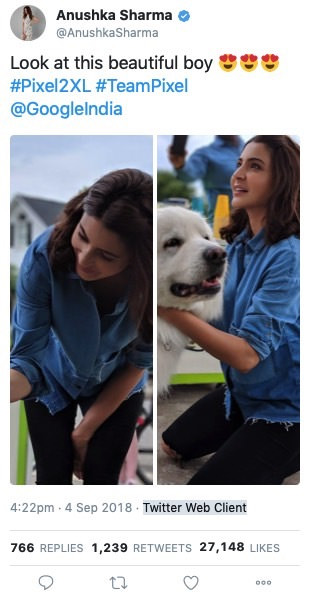 These influencers get a lot of money for promoting these products, maybe little effort would not harm anyone. But this is also partly on Google, what is next? Will they record their next promo with an iPhone?

It is most probably just coincidence but Pixel 2 is on sale now.

If your Android mobile is running slowly and loosing battery quickly, it might have been hacked